Facebook recently introduced a new bookmarking feature, allowing users to save items for reading later. Facebook has been testing this feature for two years, since the company acqhired read-it-later startup Spool. Instead of hacks for saving content, such as taking screenshots on your iPhone or other mobile device, sharing content on your own wall to “me only,” or sharing content to a secret group with you as its only member, now users have a much more effective way of saving content for reading later. Clearly, there is much excitement about this long-awaited feature. I posted about the new Save feature on my Facebook Page shortly after Facebook made its official announcement and my post has a reach of over 96,000 – my second highest reach in the past 12 months! (See post embedded below).

I talk about my most popular post over the past 12 months with a reach of over 129,000 here: How Facebook Calculates What Appears In Your News Feed For most users, they will see a drop-down arrow at top right of posts on desktop or mobile. However, according to Facebook’s Help Section on the new Save feature, users access the Save feature via an actual ‘Save’ button on the lower right of posts. My guess is this is how the Save feature will ultimately look once the kinks have been ironed out. Which, of course, is awesome! It puts the option to Save right in front of users, instead of obscuring behind the teeny gray drop-down arrow.

I’m optimistic that the new Save feature will really catch on among users en masse. However, it’s also possible that users may find the feature a bit “hidden” to really optimize (similar to how Interest Lists don’t seem to be as wildly popular as they could be). And, as a Facebook business user, there are a few important things you should know. Here are five of them:

Users can save link posts with the link preview intact. . This was a “Ninja trick” many of us Page owners had been using to attempt to get better organic reach. However, Facebook announced a change to the news feed algorithms in January 2014 that gave more love to link posts with the preview.

The best way to share a link after this update will be to use a link-share, so it looks like the one below. We’ve found that, as compared to sharing links by embedding in status updates, these posts get more engagement (more likes, comments, shares and clicks) and they provide a more visual and compelling experience for people seeing them in their feeds. Facebook Newsroom

What can be saved:

UPDATE – the following can now be saved, too:

What can’t be saved:

TIP: You may wish to slightly adjust your fan page posting strategy and start sharing more links with the preview. [Update: I recommend gradually including more links in your content strategy, especially with this news feed algorithm change giving more priority to native link posts.] You’ll want to monitor the reach and engagement over time and see if you can do as well as photo posts and status updates. Still, it’s important to keep mixing up the post type. In this blog post, I recommend a ratio of 50% photo posts, 25% link posts, and 25% status updates. Since I wrote that post just ten days ago, Facebook introduced the Save feature and I now believe this will definitely impact Link visibility in the news feed (see also #2 below). So, you might switch up the ratio now to something like 50% links, 25% photos/videos and 25% status updates. Keep in mind, each page varies and you do need to experiment. I’m definitely posting more links on my fan page. Plus, I’m including a tip for my fans to save the post. You might want to do the same. See embedded post in #2 below.

2. Some saved links go back into the news feed

We’ll sometimes show you reminders of your saved items in News Feed. For example, we might show you links to articles you saved. Facebook Newsroom

This may impact news feed ranking algorithm for your link posts. I hope so! As mentioned above, you may want to start posting more links on your fan page. And, you might include a CTA (call to action) from time to time inviting your fans to save your post. See the example in my recent Facebook Page post below, which was well received:

3. Pages can be saved

Users can save their favorite Pages from the news feed (again, desktop or mobile), OR directly on a Page. This includes Place pages. Awesome! This is very good news. Of course, you first need to persuade your fans to save your Page. And then, remember to go back and view their saved Pages. Hm. It might be more effective to persuade your fans to sign up for Notifications (which they do by hovering over the “Liked” button). To save a Page in the desktop news feed, hover over the Page name, then click the Save button: 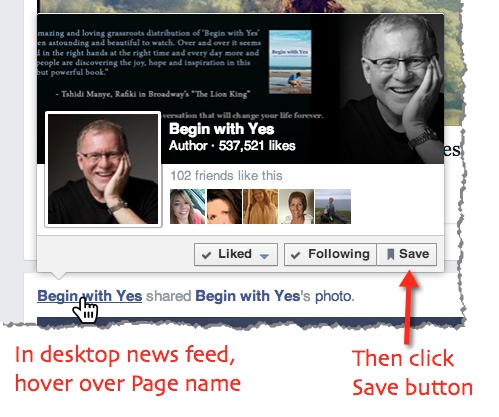 To save a Page in mobile news feed, you need to tap the Page name, then tap the Save button: 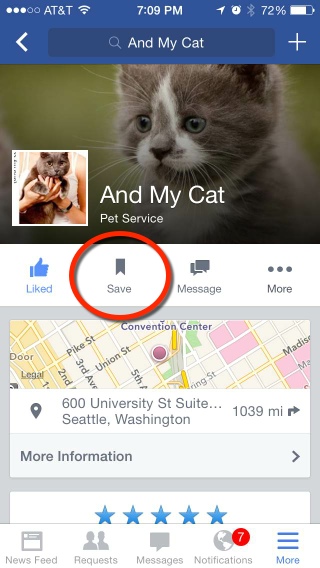 To save a Page ON the Page (on desktop), just click the three little dots, then click Save. 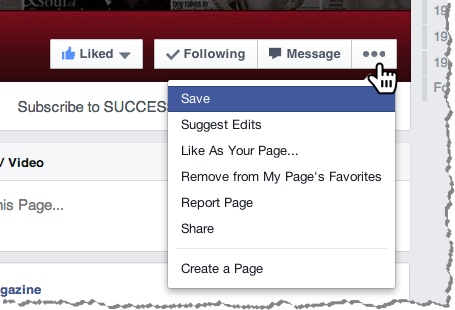 TIP: Local business owners: be sure to encourage your customers to check in on Facebook. See the example in the screenshot below of a post by renowned tech thought leader, Robert Scoble. He posted a video interview of clothing pioneer Scott Jordan seeing Whirlpool’s new Swash. Because Robert included a place check-in, that’s the only link that can be saved. (Thing is, in this example, the place is just a generic community page). 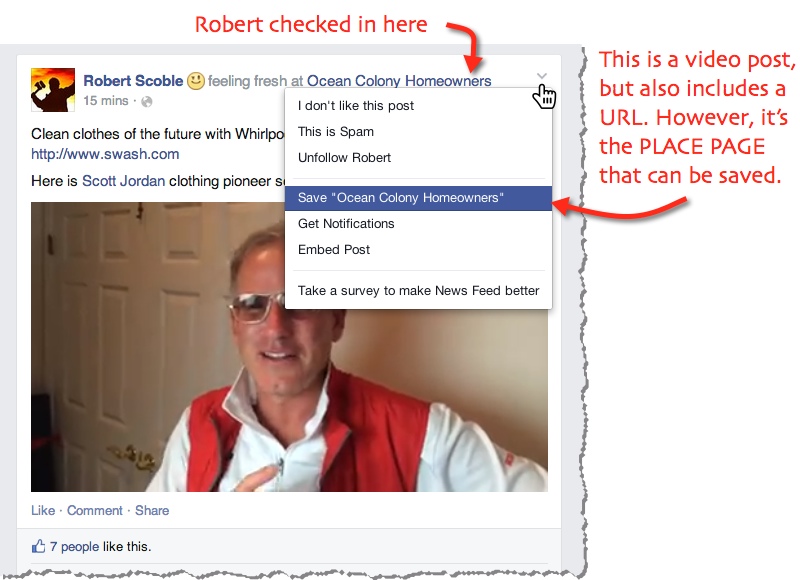 [Update: Facebook now allows users to Save multiple links in posts. So in the example above that Robert Scoble posted, the newest addition to the Save feature would allow you to save all THREE links: Swash.com, the link to the video and the link to Ocean Colony Homeowners.]

4. Links can’t be saved by Pages

If you use Facebook logged in as your Page, you won’t be able to access the Save feature. Currently, Save is only available when logged is as your personal profile. Perhaps this feature will be available for Pages to save links some time in the future, with enough demand. In fact, if Facebook’s new Save feature really catches on, perhaps the company will introduce yet another independent mobile app?! 🙂 I hope so, as five isn’t enough. (Facebook app, Pages Manager, Mentions, Paper, Messenger). Ha!

5. Stats on saved links are not available

Facebook Page admins and website owners will not be able to see how many times their links or Pages have been saved. Hopefully, this is a feature that Facebook would add in the future. Currently, Page owners can clearly see the level of interest and engagement in their content via a range of stats: reach (organic and paid), likes, comments, shares, clicks, and negative feedback.

I’ve asked Facebook whether websites and Page admins will get analytics on how often they’re Saved, which could help refine their content and promotion strategies, and better understand what to share on Facebook. It tells me “Not at this time.” There are currently no plans for an API or external Save button that developers could use to let people add to their Saved list from outside of Facebook. You also can’t natively export from Save to other read-it-later apps, which would be nice. Josh Constine, TechCrunch.com

It’s important to note that, as a user, all items you save are only visible to you. Even when you see reminders of your saved items in your news feed – these are still only visible to you. You have the option to go back to your Saved items and share individual links in the usual manner (on your timeline to friends or public, on a friend’s timeline, on a page or group you manage, via private message).

Is Facebook’s Save a threat to Pocket?

In a word, No! Unlike Pocket, Facebook Save doesn’t cache the saved items (caching lets you view a stripped-down version of the article). Rather, Facebook Save is simply a bookmarking tool that creates a list of links you can later refer to to read more in-depth and/or share on Facebook with your friends. Also, unlike Pocket, Facebook Save only lets you save links from inside Facebook (via the mobile or desktop news feed and also directly on Pages). Whereas, Pocket already integrates with so many apps, my favorite being Feedly and the Chrome extension.

The new feature, like almost all components of the social network is to keep you inside Facebook. Instead of saving items to Pinterest, Instapaper, Pocket, or other read-it-later services, you can use Facebook as a bookmarking service. It’s also a good way to keep track of restaurants and stores you may want to visit. TheNextWeb.com

So, there you have it, folks! Will you change up your Facebook Page posting strategy… just a wee bit, to include more link posts? Do let me know in the comments below. 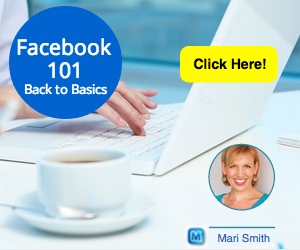 Due to popular demand, I’m launching a super-basic online training course on how to make the most of your every day Facebook activity. Find out more and get on the early-bird notification list here!

[Editor’s Note: this post was updated on September 23, 2014 to reflect improvements Facebook has since (quietly) made to the Save feature]