I just had the great pleasure of leading a Facebook video marketing best practices session at my longtime friend, Joe Pulizzi’s annual conference, Content Marketing World in Cleveland, Ohio. This powerful event features many of the brightest brains in marketing, and offers plenty opportunity to connect with influencers.

My popular session, “Social Video: How Companies are Succeeding with Videos on Facebook,” was sponsored by Animoto.

The session was jam-packed with facts, stats, the latest Facebook features and the very best practices around social video marketing. In this post, I’ll walk you through some of the key points and highlights from the session, along with additional pertinent information.

First, here’s an informative interview about video marketing I did with Animoto back in April at the 2016 Social Media Marketing World annual event:

Animoto is a powerful video creation tool — you can create high quality, professional videos literally within minutes, and typically using content you already have.

Good news! Animoto has generously extended their Content Marketing World special offer to Mari’s peeps! Go to animoto.com and enter CMW2016. The code is good for 20% off Animoto Professional or Business plans for new subscribers only, and is valid through September 30, 2016.

Okay, let’s get down to the business of social video.

If you’ve spent any time on Facebook within the last year, you know that video is everywhere. This is no coincidence; Facebook has made a big push to prioritize video in News Feed. By giving more weight to natively uploaded videos and Facebook Live video broadcasts, the company is encouraging you not only to spend more time watching video on Facebook, but also to go behind the camera. And, it’s working! Over 100 million hours of video are being watched on Facebook every day.

Why the big push toward video? Well, TV viewership is down in practically every age group, but digital video consumption continues to grow. Here are some stats that illustrate the shift:

Social Video Is On the Rise

Between April 2015 and November 2015, the amount of average daily video views on Facebook doubled from 4 billion video views per day to 8 billion. (via Flixel)
It’s estimated that by 2018, 79% of all global consumer internet traffic will come from video. (via Cisco)
Not only are digital videos getting ever-increasing eyeballs, they’re getting serious engagement: Social Video generates 1200% more shares than text and image combined. (via Brightcove)
Still not convinced that video is a good fit in your marketing strategy? Animoto shared that a whopping 96% of consumers find videos helpful when making purchase decisions. And all those blog posts you’re taking hours to create? Your customers would rather watch than read. According to a survey by Animoto, 4x as many customers would rather watch a video about a product than read about it.

Now that you know you must include video in your marketing plans, it’s time to get to work. When creating video for your social media audiences, it’s important to keep a few things in mind. First: the platform. Facebook, Twitter and Instagram all serve video a little differently.

My friends at Animoto recently shared the following tips and ideas on their blog for creating video content for each of the platforms:
Facebook

It’s also extremely important to create video content that your audience feels COMPELLED to share. This is what I call “thumb stopping” content – given over 90% of Facebook users access the platform via their mobile device, imagine they are scrolling through their News Feed and your content grabs their attention, stops their scrolling and draws them in.

And, when your viewers and extended audience (e.g. friends of friends, Lookalike Audiences), see your content you want to make them instantly feel they simply MUST share with their friends, fans and followers. Do this by sharing content that is helpful, useful, educational, timely, relevant, inspirational and/or entertaining!

Here’s an example of a short video post I created recently to help address one of the major News Feed algorithm changes, where Facebook stated posts by friends would be favored and that the change “may cause reach and referral traffic to decline for some Pages.”

This caused a great deal of panic and frustration among the business community on Facebook. My intent with this video was to provide creative ways for Page owners to maximize reach and engagement.

Social Video Is A Must-Have

It’s also important to note that creating incredible social video is not just for the big guys.

As quoted in FierceCMO, Brad Jefferson, CEO of Animoto, said: “Social video has become a must-have for businesses of all sizes. While professional marketers are leading the charge in terms of where and how much to invest, small business owners are not far behind. That is a testament to the growing ease and affordability of video distribution on social media platforms, as well as consumers’ inclination towards video content.”

Video ads are important to mention, and for a few reasons. First, check out this stat: video ads have an average CTR of 1.84%, the highest click-through rate of all digital ad formats. (via Business Insider)
That said, according to Mary Meeker in her 2016 Internet Trends Report, social video ads have a ways to go in order to be even more effective.

“If there’s ever been a call to arms to create better video ads, this is it.” ~Mary Meeker, 2016 Code Conference

Here are elements that make a video ad great:

Just check out these amazing before and after results – this is average weekly.

The company went from about 20 calls per week to 94 after the video ad ran. And from 6 bookings a week to 49.

And the total cost West Virginia Skydivers invested in promoting their video ad on Facebook? Just $115. Not too bad for generating over $10,000 revenue. 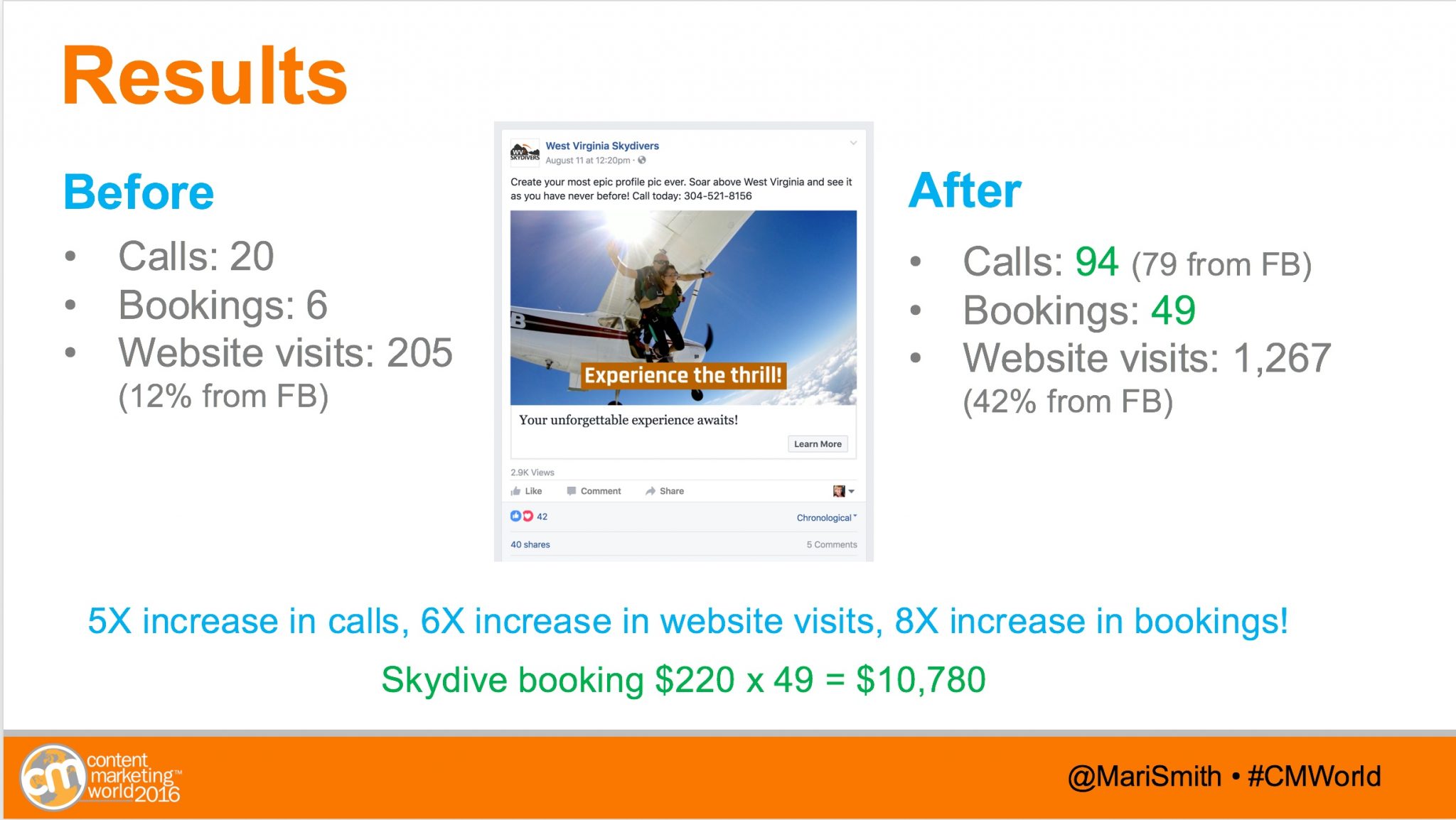 Hopefully at this point, you’re excited about creating lots of amazing video content for your social media audiences. What companies have you seen do videos on Facebook well?

Do you have any questions? Let us know in the comments below. And please do share this on your social channels – thank you!