Is Google’s hot new social network Google+ a serious “threat” to Facebook? Or Twitter? In the short or long term, I don’t think so. But, Google+ will certainly make Facebook, in particular, more agile and determined to continue improving its array of products.

(In fact, the first thing Mark Zuckerberg said at the start of the Facebook video/Skype partnership announcement on July 6 was,“Welcome to Launch Season 2011.” I took that to mean Facebook plan to roll out new features and products in rapid succession. Though, historically, that seems mostly the case!)

I wrote this blog post for those people who don’t “get” Google+ yet, who are not yet on Google+, and/or who might be in a place of wait-and-see. After a few short weeks, I’m convinced Google+ will become a *major* player in the social networking arena. (Stay tuned for my post shortly after this one which will be a tutorial with marked up screenshots: 10 Simple Steps To Getting Started On Google+). Also, those businesses that want to get a head start must pay close attention to what’s happening on this rapidly growing new social network.

The growth of Google+

I joined Google+ on June 29, the day after the site launched, thanks to an invite from a friend. Since then, I’ve been actively using the site daily, studying member behavior, and reading as many articles as possible about the platform. (My own blog post is certainly long overdue; I’ve had many posts about Google+ sitting in draft for the past few weeks, but have been so busy on all these social sites along with completing my next book!) Well over 14,000 Google+ members have added me to their circles. (There’s no limit to how many peeps can circle you; but the max you can add to circles is 5,000). Yes, the growth is unprecedented.

It’s fascinating to watch the incredibly rapid growth of Google+, the depth of sharing, the availability of heads of companies, the web celebs, the nuggets (and the noise!), and the amazing accessibility and responsiveness of the Google+ team. Not to mention that the user interface is so cool!

As you can see by the graph below, it took Google+ only 16 days to reach 10 million users. Whereas, it took Facebook 852 days and Twitter 780 days to reach the same milestone. Amazing! Of course, Google+ has the advantage of (finally) entering the social world now that this arena is more established by Facebook and Twitter. Not to mention the pre-existing large userbase Google already has from its array of excellent products. 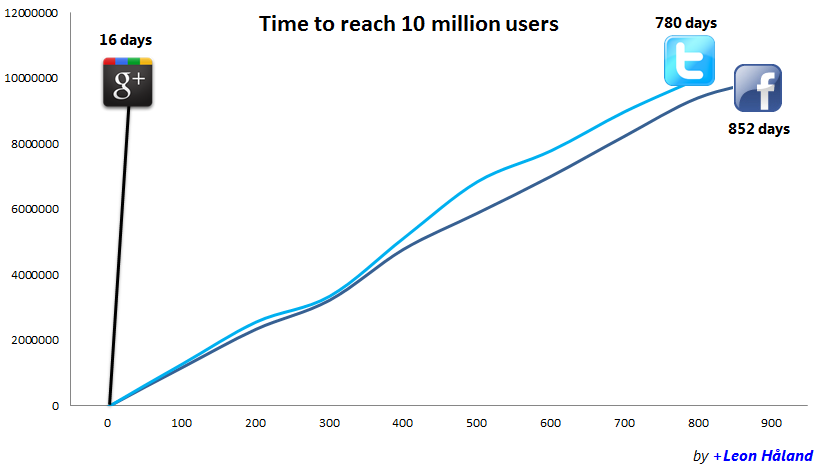 Do we need another social network?

As much as I love Facebook, I have to say that I’m extremely excited about Google+. In fact, I haven’t felt this excited about a social network since I first joined Facebook in May 2007. Facebook will always be my “first love,” and the site is certainly here to stay. I plan to continue building out and maintaining an active presence with my Facebook personal profile, my Facebook page, and on Twitter.

To me, it’s a both/and world. It’s taken me many years to build up and nurture my communities on Facebook and Twitter; I’m not about to abandon them because a shiny new toy arrived on the scene. Obviously, there are only so many available hours in the day for social networks, though, and now my intent is to simply divide up the same time between these platforms. (And, I’m not here to tell you what’s right and wrong; individuals and business will need to reassess their own approach to social networking now and find what works for them).

There’s room for ALL the popular social networks to co-exist. People will simply choose the social network(s) where the bulk of their friends hang out, and/or the social network(s) with the coolest features. It’s early days yet, but with the sheer size of Google’s existing userbase of all its products, at some point I can see Google+ overtaking Facebook as the #1 social network in the world. Yep, it’s that good. Kudos to Google: I do believe they’ve finally cracked social. (Businesses, pay close attention!)

According to a survey carried out by Bloomberg, Google+ could become the second biggest social network within the next year, moving past Twitter and LinkedIn. ~Scribbal.com

For now, I highly doubt we’re going to see any kind of mass exodus of Facebook users to Google+. For many people, it can feel like a foreign land and foreign language to have to learn a whole new social network. Many users on Facebook are still getting to grips with the (constantly changing) features on the platform. Besides, if the average user on Facebook uses the site to connect with family around the world and to play games, they will stay there so long as they can still reach their loved ones and play their games.

I understand games are coming to Google+; I do hope Google tries hard to differentiate and we don’t start seeing “farm” and “fish” updates pouring into the stream!

Unless and until Facebook bites the bullet and launches a killer search engine – it’s certainly sorely missing! Yes, I know Bing has some Facebook integration. But, wouldn’t it be great to easily search fan pages (your own and others) at the click of a button? There is such a plethora of content on our pages and it would be awesome to have a way to easily archive and search this valuable content (you know, like a blog?!).

However, for now, as a social network, Facebook has the upper hand with its long-established user behavior, length of session time, amount of game players, social ads, and business pages.

What about Google+ business profiles?

Just like we manage our communities on both Twitter and Facebook and our own blogs, (and for many businesses, also LinkedIn and YouTube and other platforms), at some point (soon!) I see that we will be “forced” to also manage a business community on Google+ to cater to those customers and prospects who simply prefer this network. Plus, you’ll need to include Google+ when managing and monitoring the reputation of your business/brand. There’s much that businesses ought to be doing right now to get a headstart though; I’ll cover this in a forthcoming blog post Don’t Wait For Google+ Business Profiles – 7 Actions To Do Now.

Here’s a rundown of what I’m loving about Google+ so far, in no particular order, and why I think you should jump on board now too:

Another cool feature is Sparks – where you can search and easily find content on any subject or categories of subjects and instantly share with your network. I have only just dabbled with this feature so far and have not found it to be that useful yet. Google will be adding improvements. In addition, I understand the mobile G+ app on the Android smartphone rocks. I’m an iPhone gal; the G+ iPhone app is somewhat rudimentary and slow… but a better one is coming.

I’m enjoying reading articles about potential interoperability: the option to interact with our friends in their preferred network on our chosen network. (At the rate Facebook is booting out friend list scrapers – and banning Google+ ads – I may question its desire to be open. Still, it’s a good protection for users to be able to choose what happens to his/her email address/contact info).

Technology journalist and Lead Writer for ReadWriteWeb.com, Marshall Kirkpatrick, wrote that Google Plus’s real goal is not to kill Facebook, rather to force it to be open and allow interoperability:

Back in the bad old days, customers of one phone network couldn’t call customers of other phone networks, then people couldn’t email out-of-network. Today people can’t be social across networks, but few people mind because everyone they care about is on Facebook. [Google] Plus is a big push to change that. – Marshall Kirkpatrick

Tips for getting started on Google+

If Google+ is brand new to you, stay tuned for my very next blog post: 10 Simple Steps To Getting Started On Google+ with marked up screenshots. Meantime, here are a few quick tips to getting started on G+:

Google+ widget for your blog:

In conclusion (for this post!), I just love this nugget from Tom Anderson, who is one of the most active and most followed users on Google+:

…more than anything, I think, you need to remain flexible and pay attention to how the Internet is evolving. There’s no one-size fits all strategy, and you’ll probably want to modify your own strategy as it suits your needs. ~Tom Anderson (former President, founder and first friend on MySpace) excerpted from this guest post on TechCrunch.

I know this turned out to be an uber long post, and there’s even more to share about Google+. Stay tuned for the following two posts coming right up:

SO, are you active on Google+ yet? What do you think so far? Do your friends and colleagues use Facebook more, or Google+ more now? If you’re not yet active on Google+, why? Do share your thoughts with me in the comments below:

Remember, Facebook is still home to 750 million active users, half log on daily for an average session time of 55 minutes. Well over 250 million users access Facebook via their smartphones and these mobile users are twice as active as web users. There is a massive captive audience on Facebook and if you’re serious about taking your business or brand to the next level, you owe it to yourself to truly understand and tap into all that Facebook offers. Come join me for the Facebook Success Summit 2011! It’s entirely virtual, no travel or hotels. Learn from 19 Facebook marketing experts as they share exactly how you can maximize your marketing on the world’s #1 social network. Featured presenters include Guy Kawasaki, Robert Scoble, Jesse Stay, Paul Dunay, Mike Stelzner, myself and many others! Tickets are currently half-price, but you can also try before you buy with a free online class lead by yours truly: Facebook News Feed Optimization: How to Dramatically Increase Your Visibility and Engagement.

[Yes, I know; it’s ironic plugging a Facebook program on a post raving about Google+; but, like I say, Facebook is here to stay and there’s massive business to be had by using the site properly!]