Facebook released an updated estimate on April 4, 2018 stating that the information of up to *87 million* people (not the original 50 million) — mostly in the US — may have been improperly shared with Cambridge Analytica.

*** UPDATE: 4.10.18 @ 9:45am PT. You can check whether your Facebook information was shared with Cambridge Analytica or not by following this link on Facebook’s Help section. ***

Starting on the morning of Monday, April 9, 2018 when you first open up Facebook on mobile or desktop, you’ll see a new notice at the top of your feed.

All 2.13 billion Facebook users will see “Protecting Your Information” at the top of their news feed, with a link to see what apps you use and what information you have shared with those apps. As part of this process, Facebook will also tell you if your information may have been improperly shared with Cambridge Analytica.

NOTE: Facebook stated ‘starting on Monday,’ so it’s not clear if the rollout of this notice is for all users right away, or if the notice will roll out in phases.  We’ll all find out soon enough.

Over 81 per cent of the Facebook users impacted by the Cambridge Analytica data breach debacle are in the United States. 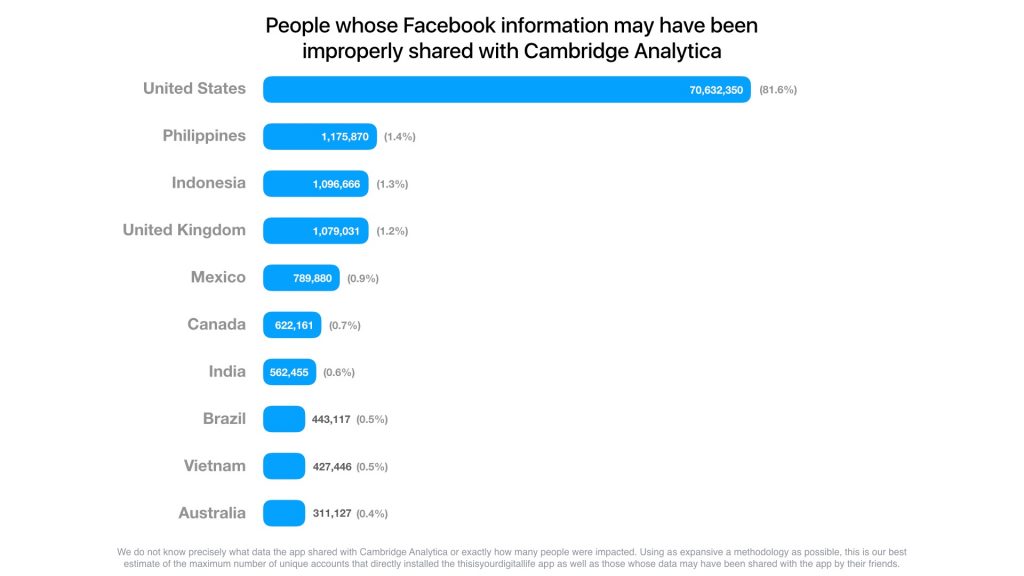 Folks, this is not a time to panic.

Take back control of your data by adjusting your privacy settings, revoking certain apps’ access that you no longer wish to use, and striving to be ever more mindful about exactly what you choose to share on Facebook. And all across the Internet, for that matter.

Remember that we all leave a ‘digital footprint’ wherever we go online and on our mobile devices. Cable companies, Internet Service Providers, email services, Amazon, Apple, Google… all have inordinate amounts of our data.

This doesn’t necessarily provide any solace around the Facebook data situation. But, we as users/consumers need to be aware about exactly what terms and conditions we are accepting. And to stand up for what we want to protect.

Facebook is making it even easier to check which third-party apps have access to your data. Users have always been able to see which apps they’re connected to and control the data shared, or not. It’s just not been that obvious. On desktop, click the blue down triangle at the top right of Facebook > click Settings > click Apps and Websites. (Up until recently, this used to say just Apps, but now has Websites added). 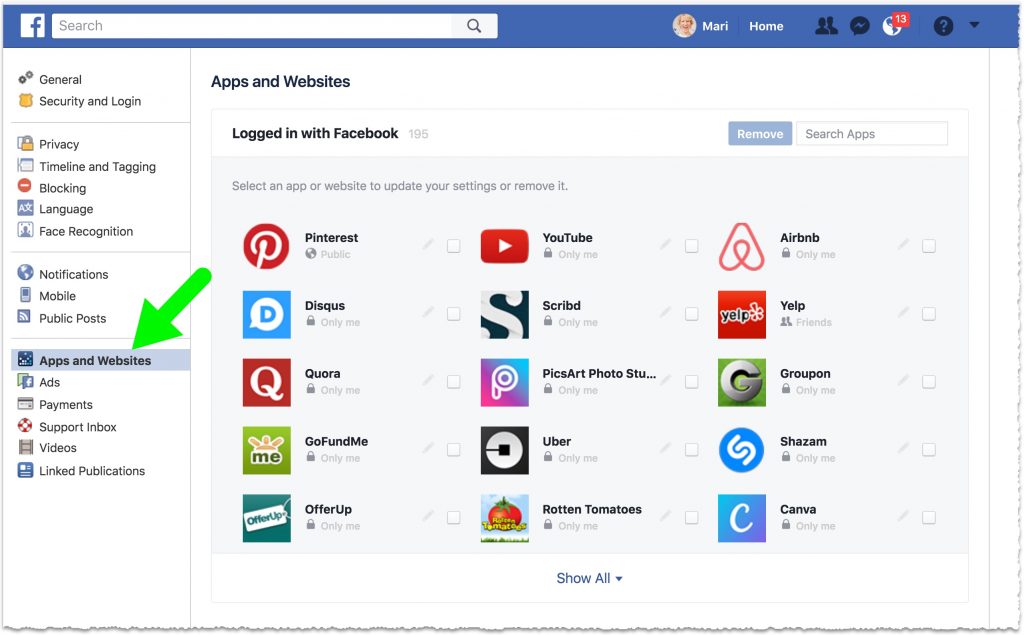 From this screen, you can simply select which apps you wish to prevent from accessing your data any longer.

You’ll likely want to remove old game apps, for example, that you no longer use or apps you tested a long time ago and you had long forgotten that you’d approved.

NOTE: Facebook will automatically remove any app’s access to your data if you haven’t used the app in three months.

Plus, also note: removing the apps access to your Facebook data does not automatically remove any data that those third party app developers may have on file for you. You would have to contact each app company separately if you really want to go that far. Even so, as was the case with Cambridge Analytica, how would we know for absolute certain that our data is fully removed and deleted from their records? Hm.

Going forward, if you want to stop Facebook from recognizing your face and tracking your online activity, you might check out the Firefox ‘Facebook Container‘ extension. Find out more via this USA TODAY article.

Meantime, this is a HUGE week for Mark Zuckerberg as he faces Congress on Tuesday and Wednesday.

Zuckerberg faces one of the biggest tests of his career, and a pivotal moment for Facebook’s future. The company could be facing record fines. And, Zuck’s testimony could fuel new efforts to regulate not only Facebook but also the entire tech industry.  It’s going to be a powerful week.