Whether you’ve purchased Facebook Social Ads or have in some way interacted with these ads, you may be underestimating the power of this Facebook feature.

First, as an advertiser, you can select very targeted demographics for your ad campaign, much as you can with Google Adwords. 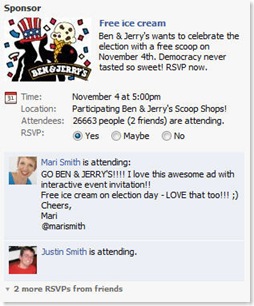 Second, as a business owner utilizing Facebook to grow your brand and network, engaging with ads is a powerful way to increase your visibility.

Justin Smith wrote a great review of the Six Types of Facebook Ads which are:

I love interacting with Facebook Ads! For example, during election time last November, Ben & Jerry’s ran both an Event Ad and a Gift Ad. With the Gift Ad, you could give your friends a “virtual” ice cream cone – and it would just post on their wall. No app to install, no “forward to friends” enforcement. Just a playful way to say “hey, I’m thinking of you” and, in return, creating additional visibility for both the friend and yourself because the action is pushed out into the News Feed. 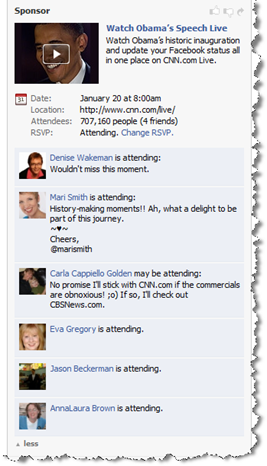 Now with the inauguration imminent, CNN are running an Event Ad which you’ve likely seen on your home page. Regardless of your political orientation, by RSVP’ing for the Event and writing a short (relevant/positive) comment in the text field, you’ll gain additional valuable visibility for yourself.

Whatever you write in the text box gets automatically transferred to the Wall of the Event page. (Same goes for Event invitation request you receive from all your friends!)

Ads on social networks may not be as effective as ads on search engines, simply because web users are in “social mode” on the former and “search mode” in the latter. However, ads on high-traffic social networks, such as Facebook, are a powerful way to further your brand and gain name awareness – especially when you ad in the component of Social Actions.

As an advertiser, you may find more click-through success by advertising an Event, Group or Fan Page with a Facebook Social Ad, e.g. keeping users inside Facebook. When a Facebook member interacts with the item being advertised, the “social action” shows up next to the ad – usually in the form of “Jane Doe became a Fan of…” with their avatar.

From a user standpoint, just be aware that you are essentially endorsing that ad and what’s being advertised.

What’s your experience and opinion of Facebook Social Ads? Have you run an ad campaign with success? Do you enjoy interacting with ads as a user?