[UPDATE 5.6.09 8:32PM PDT: I just got off the phone with the President of the company that the retweet hijack webmaster worked for. The conversation went well and I appreciate now that the company is a global organization with a large staff and an excellent reputation. The situation unfortunately got out of hand. I have chosen to edit this post to remove the company name.]

[IMPORTANT UPDATE 5.5.09 2:45PM PDT: Josh xxxx (last name removed), webmaster for @(name removed) has been in touch with me via email and also commented on my post (see below) and this post and on Twitter to extend his apologies and express his regret for the actions he took. I appreciate the gesture and may consider taking this post down, per Josh’s request… or at least making it anonymous, such that further repercussions are avoided.]

I don’t know about you, but I give GREAT care as to what I tweet about, even in my @ replies and conversations… even DM’s (direct messages). I run everything through an internal filter of:

And, I’m always upbeat, positive and focused on adding value. (My tweeting style has been described as the “little Tony Robbins on your shoulder!”)

Now, I appreciate there are no “hard and fast” rules to using Twitter – or any social network, for that matter. BUT there are most certainly general rules of etiquette. And there’s personal INTEGRITY. Something very dear to my heart.

This morning, I put out this tweet: “Mother’s Day is coming up on May 10! This is a great site & service for same day gifts! http://flowersfast.com.” 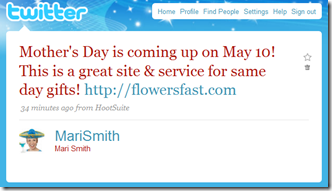 One of the reasons I chose this site to tweet is I know the owner of the site and service personally.

I was delighted to see several retweets. But then something odd caught my eye – a guy retweeted me, but replaced the link I tweeted with a link to his OWN website, thereby inferring I was endorsing his site. UGH! That is the antithesis to best practice. I was not amused. See the screenshot below: @(name removed)’s tweet goes to his own xxxx site. 🙁 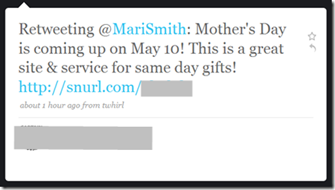 If you know me at all, you know I’m not the type of person to put energy into anything negative; if there’s a challenge to deal with, I’d rather do so quietly and privately. So, I saw that @(name removed) and I were following each other thus allowing direct messaging.

I was a little, um, terse – I broke one of my own relationship rules and that is I sent a message while just a smidge emotional. It’s always best to allow a wee bit of time to calm down and gain perspective.

I also decided to send a regular tweet sharing what just happened… without outing Mr. xxxx just yet – to see if he could somehow rescue this situation. He didn’t. It seemed to get worse. I received a barrage of DM’s from Mr. xxxx telling me it’s a free country and it was “lame” to “legislate integrity.” Oh dear. Well, guess whose xxxx company I won’t be using. Yes, it’s a free country.

Ignoring this occurrence may have been a better choice. But I wanted to make an example of this practice – which I now understand is becoming more prevalent on Twitter. In fact, it’s called “Retweet Hijacking!”

Blocking someone on Twitter will not prevent this type of hijacking behavior.

What are your thoughts – what would you do? Have you experienced/seen any retweet hijacking? Do you agree with this xxxx guy that it’s a “free country” and he didn’t break any of Twitter’s Terms of Service? Should the citizens of the Twitterverse bandy together to ensure best practices? Please share in the comments below [click Comments]: