Top marketing automation platform, HubSpot just held its annual epic convention called INBOUND in Boston, MA last week. HubSpot is a developer and marketer of software products for inbound marketing and sales. It was founded by Brian Halligan and Dharmesh Shah in 2006.

Each year, INBOUND attracts an even larger crowd and 2018 was certainly no exception. #INBOUND18 boasted a whopping 24,000 attendees from all over the world! The growth trajectory for HubSpot and INBOUND has been incredible. I recall just 14,000 attendees in 2015!

INBOUND is one of my favorite industry conferences. It’s extremely well organized. The caliber of speakers and sessions is always high. The range of topics is always diverse and on point. The celebrity headliners are always knowledgeable and terrific speakers with mass appeal that I personally want to see anyway!

I loved Brené Brown’s keynote twice at INBOUND over the past few years. Along with Michelle Obama last year and Deepak Chopra, Shonda Rhimes, Scott Harrison and Chimamanda Ngozi Adichie this year.

Takeaways from @HubSpot‘s @INBOUND 2018 https://t.co/wPm1vA6cTk via @cmswire | Excellent read. Love this one: “Video is the victory route for Marketers.” Yes! ????#INBOUND18

PLUS, HubSpot keeps coming up with ways to think outside the box. How refreshing to see dedicated spaces for prayer, meditation, no sweat yoga, massages and more!!

Yoga, meditation, HIIT workouts, massages and more! ? Great to see so many options for #wellness at #INBOUND18 #MoveAtInbound pic.twitter.com/gsjTaH4OwE

This was my fourth year in a row speaking at INBOUND, leading two sessions on Facebook marketing. I’m delighted to be the #1 highest impact contributor to the #INBOUND18 hashtag on Twitter, clocking up 124 million impressions. Wowee! Screenshot below from TweetBinder. See the Twitter report for #INBOUND18. 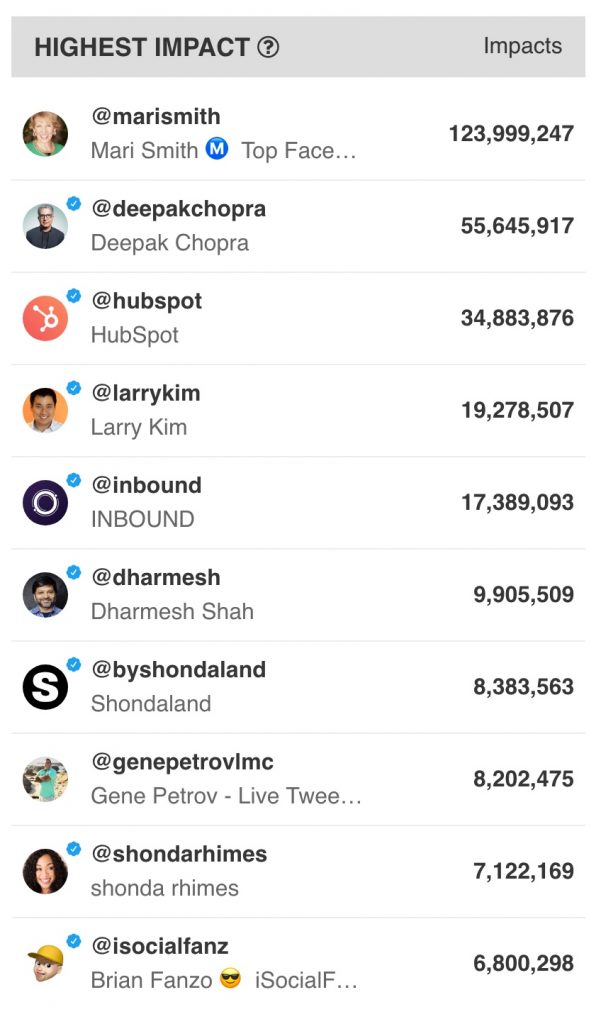 Top 20 pulled from the hashtag analysis report from Metricool – embedded below.

The #INBOUND18 hashtag generated 37,806 tweets with what TweetBinder calls an ‘economic value’ of $902,017. Wow, amazing to see the impact/impressions of my tweets during INBOUND18 amount to over $200k. 😉

For a number of terrific highlights, I’ve spotlighted a few of my favorite tweets & most popular tweets below:

I streamed Deepak Chopra’s opening keynote to my Facebook personal profile. I’ve been following Deepak’s body of work for many years and am a big fan. The beginning of Deepak’s keynote, I was a tad worried it was not going to be a fit for 24,000 marketers/business people, ha! But it quickly became very relevant and I was optimistic that Deepak gave everyone some key takeaways we could all implement straight away… such as the Six Pillars of Physical Wellbeing.

“Human suffering comes from not knowing the nature of reality, grasping that which is ungraspable, fear of impermanence, not knowing yourself, and fear of death.” — @DeepakChopra #inbound18

I found & used this old contact sheet for my #Inbound18 presentation yesterday. The many faces of my 30 year old self. What could I say to her now that would have helped her then? I’d start with this: “You will fail, but you will learn. That opens up a path to success.” #TBT pic.twitter.com/jvtSkOIVOY

This is the only time I feel a wee bit like Batman.*

This is the funniest talk I’ve ever given. Not a particularly high bar, but still…

Similarities between raising a child and a company (I love the last one!)
@dharmesh @hubspot #INBOUND18 pic.twitter.com/cFVMHT3bOr

Attending Dharmesh’s keynote session was without a doubt the highlight of my week at #INBOUND18 – top marks for content, delivery & honesty. @dharmesh #hubspot #inboundmarketing pic.twitter.com/0tXwsyhwhF

This is what a slack room looks like when your founders are slaying their #INBOUND18 keynotes. @dharmesh inducing belly laughs & a new customer code https://t.co/bxppbxM7Us @bhalligan sparking a new way to think about growth https://t.co/5Fr7dXFf0E pic.twitter.com/xTA6eVUDwN

You won’t need to defend objections such as price and features if you are solving a real problem for a buyer, says @keenan #INBOUND18 pic.twitter.com/cXpQmcx1ig

“If you want to build a great company in 2018, your customer experience needs to be 10x lighter than the competition.” -Brian Halligan #INBOUND18

Loved the reveal of the @HubSpot Flywheel by @bhalligan. Such energy and excitement!! #INBOUND18 pic.twitter.com/MWz6z7kBPK

“If the first thing you’re doing in the morning is checking your inbox, that’s probably not a good idea. That’s letting other people prioritize your day.” -Brent Chudoba #INBOUND18

“Own your screw ups. We all make mistakes. Just say sorry, be sorry, and make it better.” -Dharmesh Shah #INBOUND18

Startups Are Winning the Remote Work Game. Here’s the Data That Proves It. via @dharmesh #INBOUND18 https://t.co/s6qClGTVcW

“BOTS ARE FOR FILTERING. Bots are not for closing the sale.” @ryandeiss
? ???#INBOUND18 #ConversationalMarketing pic.twitter.com/XBh8p5ZQcv

My friends at Wave.video hosted a fun VIP mixer  at their offices just a few minutes walk from the BCEC. We had a blast and got a sneak peek at one of Wave.video’s new features — the ability to add STICKERS to your videos.

Epic video offer from my friends at @wave_video here at #INBOUND18. Get 85% off a https://t.co/VOwv2z9Mjx Ultimate Annual Plan! Use code WUA_MariMixer ???
(Exclusive offer extended to Mari’s peeps!)
More info on this fun FB Live: https://t.co/sN6GSGt16H pic.twitter.com/rDd2TZyHDW

Give this fabulous Shonda Rhimes quote some love if you agree. #INBOUND18 pic.twitter.com/G9LyPoR5GQ

It’s the year of the #introvert. Thank you @INBOUND for showing that introverts can overcome workplace stereotypes of “successful people.” #INBOUND18 pic.twitter.com/v7tRenubAE

Why Now Is The Time To Build Your Personal Brand ? via @BrennerMichael #INBOUND18
https://t.co/tPDBwu9XqE pic.twitter.com/af616XcDGN

It’s my 43rd birthday today, my daughter’s 2nd, and @charitywater’s 12th. The amazing event organizers surprised me onstage this morning during my intro at #INBOUND18 – wasn’t expecting that! pic.twitter.com/IKmZgovq3v

“It is equally important to read about people who are not like you. I want to hear people I disagree with. I want to know the world view of people who don’t see the world as I do.” #INBOUND18 Chimamanda Ngozi Adichie ??

#INBOUND18 – four days of education, networking, and a whole lot of fun – has officially come to a close. Let us know how INBOUND left you feeling in a gif! pic.twitter.com/Nqd3HHiWZD

Check out this fabulous #INBOUND18 roundup posts as well: