As reported by TheNextWeb, among others, back on October 31st, 2012, Facebook began testing a new Timeline layout with a single column of posts.

And now, the new design just rolled out on my personal profile.  Awesome!!  No more eyeball ping-pong bouncing back and forth to read content. Presumably, Facebook is still conducting tests on certain profiles. But, my guess is this new format is imminent for many more users. I doubt it’ll take as long to switch from the old layout to the Timeline layout as that was a major overhaul. (Read comments on this new layout on my Facebook post here).

I’ve marked up a screenshot below with an overview of all the most prominent changes. If you know of any additional ones, please do share in the comments below! To view the image full size, just click on it.

I rather like that you can now organize various sections of your profile as you wish. That is, except for About, Friends and Photos – they have to stay in place in that order. I was surprised to see many sections resurrected that I’d long forgotten about… like Books and Notes. Fortunately, it’s easy to hide sections that you don’t want displayed.

As reported by Mashable, among others, on December 5th, Facebook announced that it would be changing the label of “Subscribers” to “Followers.” Just makes more sense, really.  A Follower can see your personal profile posts in their news feed that you publish to PUBLIC. (FYI, anyone can see any public content on your profile anyway. Following someone just means you’re more likely to see their posts in your news feed). Basically the same as a fan (Like) on your fan page. Except, ahem, it’s not 100% of your Followers or Fans (or Friends) who see your posts in their news feed. That’s where promoted posts come in. We’ll leave that for another blog post.

I am stumped by the new “Highlight” feature. Previously, starring a post would make it appear “double wide” across both columns. Now, the post just gets a little bookmark flag in the top right corner and nothing else seems to happen. My guess is there is a section coming called Highlights where all your starred posts would appear for quick access. Thoughts? 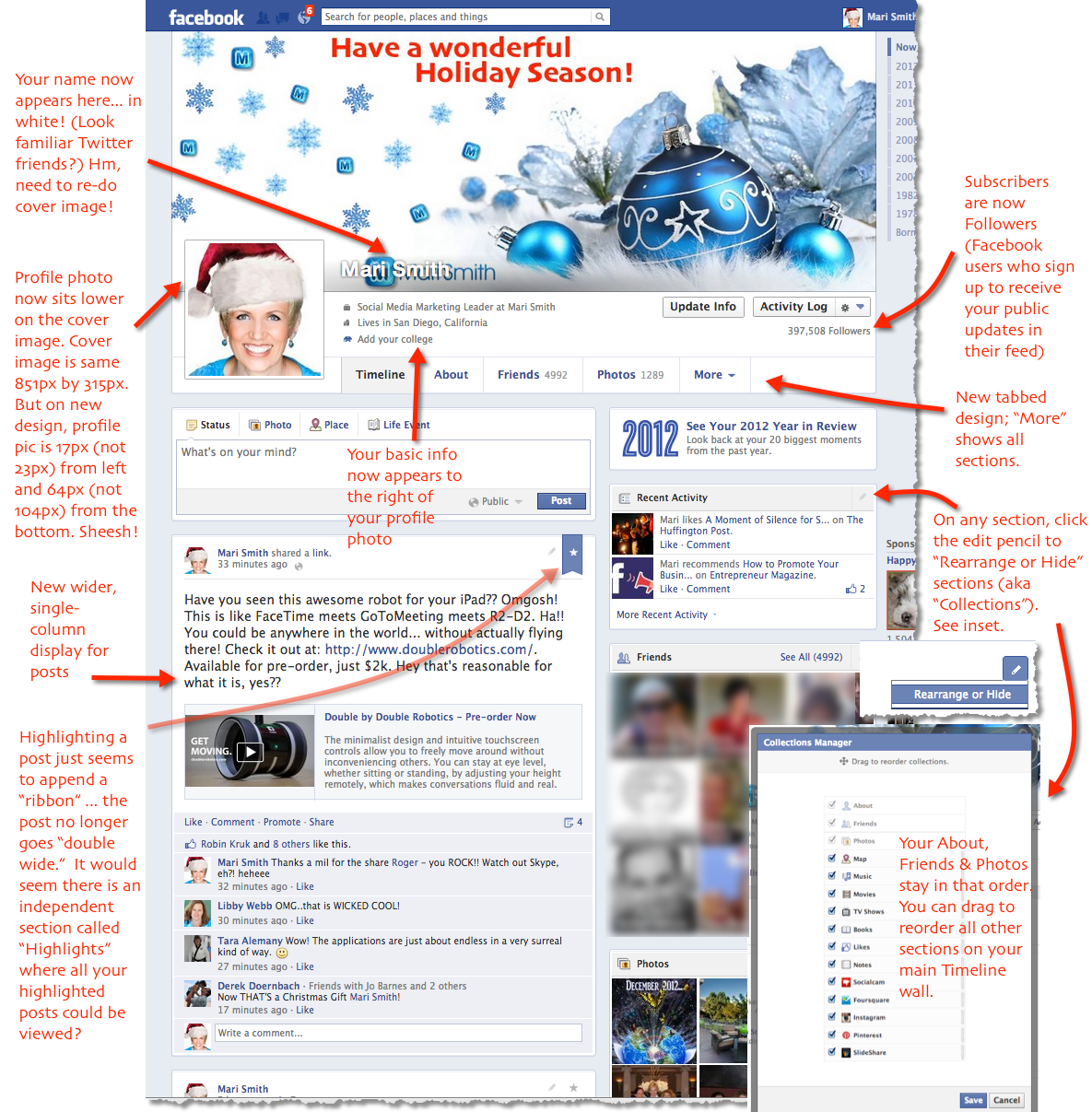 I predict that before long, fan pages (Business Timelines) will also get the new single-column layout.

I don’t know about you, but my most wished-for feature now is a rock solid SEARCH… and not necessarily for Facebook sitewide (though that’ll be nice when it comes), but I’m talking about the ability to search for content on my fan page and others’ fan pages. You know, like a good search feature on every blog on the web?? 😉 Just sayin!

Do you have the new single-column Facebook Timeline layout yet? (Personal profile). Whether you have the new design or not, what are your thoughts on the features (as illustrated in the screenshot above)? Please share below: